Best Firewood For A Fire Pit

Choosing the best firewood for a fire pit can seem like a daunting task with all of the types of wood available (both in nature and for sale at the local stand or market).

Have no fear, we are here to help you find the perfect fit.

From what to look for in your firewood, the best types of wood for your fire, and even what to avoid, we will tell you everything you need to know to have the hottest, longest, and easiest to maintain fire possible. 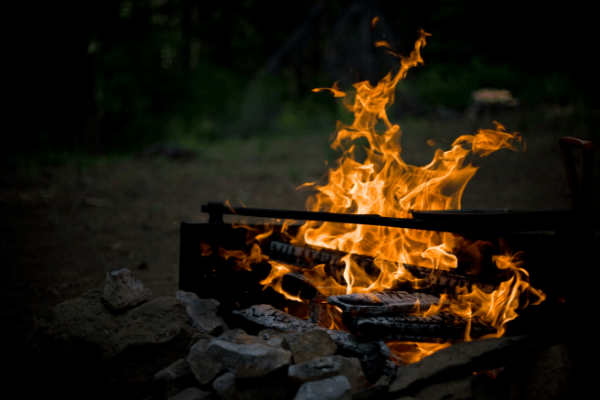 Keep reading for the best tips on the ultimate bonfire.

When choosing the right firewood for your fire pit, you should consider what your fire is meant to accomplish.

Are you having friends over and don’t want to have to worry about tending to a fire?

Will you be cooking food on the fire?

Are you camping and need a fire for warmth?

For the most part, it is generally best to use a type of hardwood that has been seasoned for, at minimum, six months.

The term “seasoned” means the wood has been thoroughly dried and contains little to no moisture, roughly 20 percent or less.

Seasoned hardwood is preferred because it can burn hotter and longer than other woods and means you do not have to constantly tend to your fire. 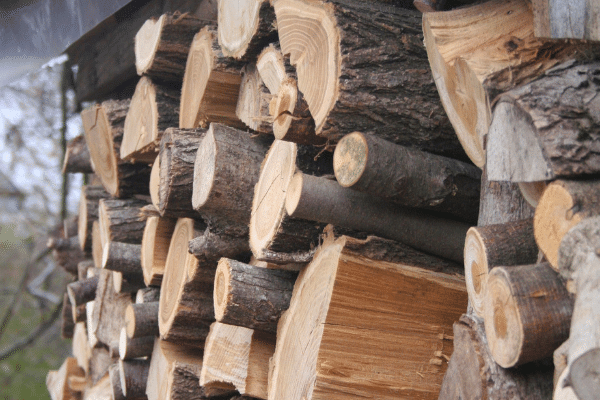 It also burns much cleaner than non-seasoned wood, producing minimal smoke which is definitely a plus when sitting around a fire pit.

If you didn’t cut and season the wood yourself, you can tell whether it is seasoned by knocking two pieces together.

If you hear a lower pitched thud, that means you have greenwood— the term for non-seasoned wood.

Seasoned wood, when knocked together, will make a higher-pitched sound.

If you are purchasing wood from someone else, try to buy kiln-dried logs.

Kiln dried firewood has been dried inside of a firewood kiln for a specific amount of time, drying out the wood and killing any invasive pests or insects that could be living inside the firewood.

This is helpful when you travel to reduce the possibility of spreading harmful insects.

How To Start Your Fire Quickly In A Fire Pit

Hardwood, again, is the general recommendation for most types of fire.

However, if you are trying to get your fire started as fast as possible, you may want to use seasoned softwoods as your kindling.

While softwoods do light more easily, they burn much more quickly - meaning you need more to keep your fire going.

Therefore, for a longer-lasting fire, we recommend feeding your fire with hardwood once lit.

This will allow you to have a hotter and longer-lasting fire. 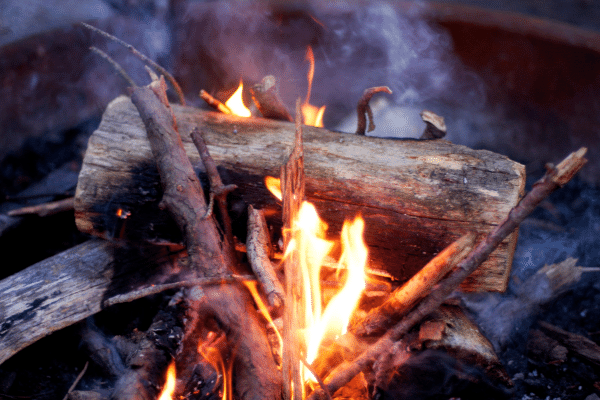 Hickory, oak, beech, birch and ash are all known for producing some of the hottest fires.

For a fire that is meant to cook food on, you want to be sure you are using well-seasoned hardwood only.

This will ensure you are producing the least amount of smoke possible.

This is unless you are attempting to smoke meat.

If you wish to smoke meats, cherry, apple, or maple all produce a sweet smoke that can add flavor.

What's The Best Firewood For A Fire Pit?

Again, hardwoods are the best firewood for a fire pit.

This, however, is only true when the wood is fully seasoned and has little to no moisture.

The density of seasoned hardwood allows for a clean, consistent, and lengthy burn.

Here are some of the top choices for the best firewood for a fire pit: 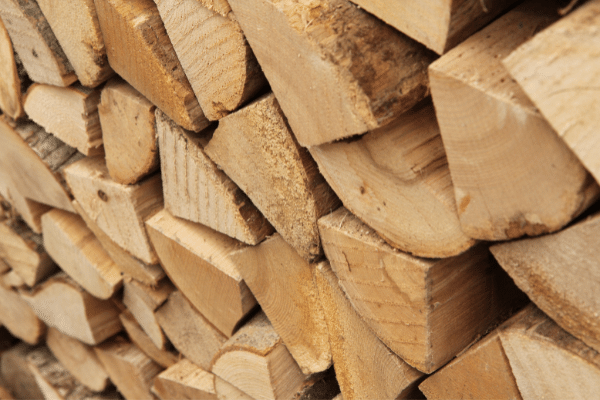 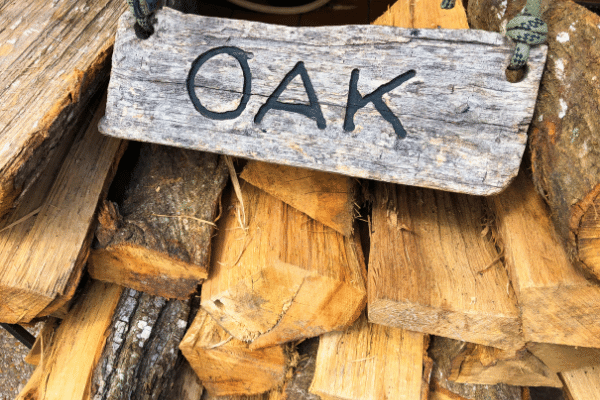 Best Firewood For A Fire Pit That Creates Limited Smoke

This is because hardwoods are much denser than softwoods and usually do not have as much sap residue on them when dried.

There is one exception - steer clear of poplar and elm both of which tend to produce more smoke than other types.

When attempting to make a fire that produces minimal amounts of smoke, you want to make sure your logs are split well and properly seasoned.

Any amount of moisture has the potential to produce smoke.

Similarly, the denser the wood, the better as it will burn more slowly and not allow for much smoke to accumulate. 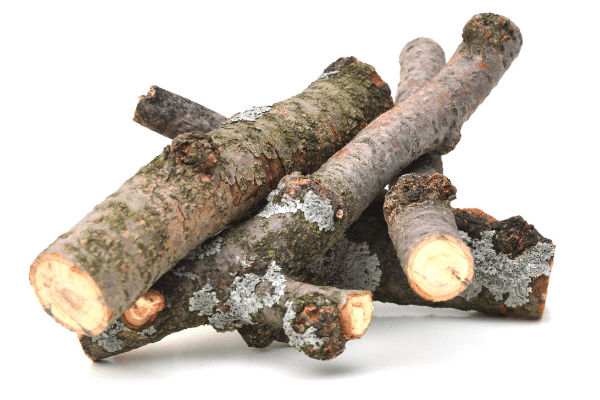 Ash, and specifically white ash, is often recommended as some of the best firewood for a fire pit because it creates very little smoke.

It is dense, slow-burning, and already has a low moisture content when freshly cut.

Similarly, due to its density, oak produces a lot of heat without burning up quickly, allowing it to emit less smoke.

However, oak does take much longer to season than ash, sometimes as long as 2 years.

Another great way to reduce the amount of smoke your fire lets off is to make sure your logs have plenty of space in between them.

This will allow them to be well-oxygenated ensuring full combustion is achieved.

When full combustion is not achieved, smoke is released.

What Kind Of Firewood To Avoid In A Fire Pit

We have already discussed the best firewood for a fire pit and will now go over the wood you should absolutely avoid burning.

Burning any of these woods comes with the possibility that your health could be at risk.

This is particularly important if you are burning wood in an enclosed space.

You do not want to burn wood that has been processed in any way with chemicals such as paints, laminates, sealants, or stains.

These treated woods have the potential to release dangerous chemicals into the air that can cause severe medical issues if you are exposed to them. 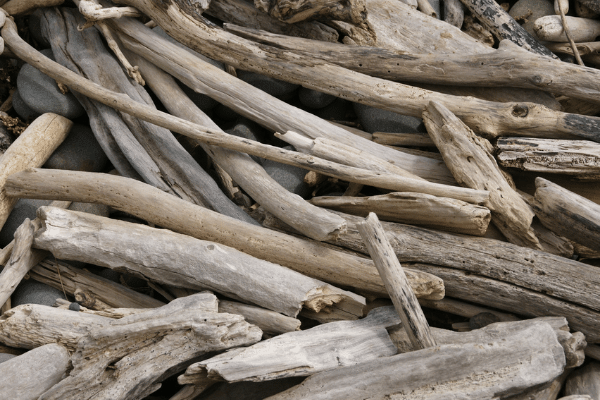 Green firewood, or freshly cut wood of any kind, will let off lots of smoke when lit.

It is never safe to inhale large quantities of smoke even if it is from fresh, untreated wood.

Never burn any type of driftwood as it is usually coated in salt.

When burned, the salt can release toxins into the air that are extremely harmful.

Avoid attempting to burn rotten wood as it does not burn for long and produces small amounts of heat.

More importantly, the wood has the potential to have mold which, when burned, can be harmful to your health.

The Best Firewood For A Fire Pit - Overall

Depending on what you want to get out of your fire, you have many great choices when it comes to the right wood.

Remember to always stick with fully-seasoned hardwoods when feeding your fire (if they're common in your area) and only use softwoods as kindling for easy ignition.

Make sure your logs are not tightly packed together and have plenty of air to breathe.

Learning how to build a fire in your fire pit is a blast - and now you know exactly how to do it the right way.